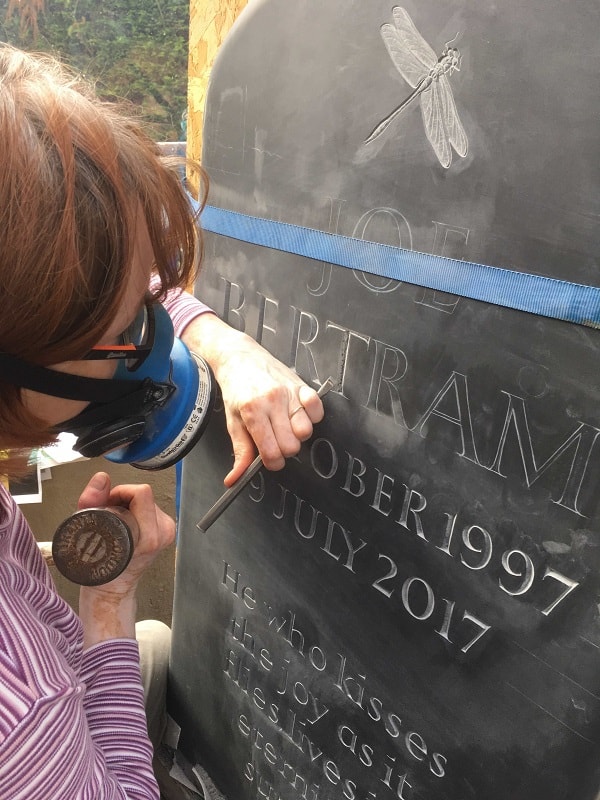 As part of our ‘30 Years of IB’ celebrations, we are exploring the impact of studying the International Baccalaureate (IB) as a young adult. Louise Tiplady, letter carver and sculptor, was in our first cohort of IB students and has kindly shared her experiences with us. Find out why she chose to study the IB, how it shaped her career and why she would recommend the IB.

Why did you decide to study the IB?

The College introduced the IB at the same time that I was considering my options for Sixth Form. The course was unfamiliar, but it sounded exciting, and I liked the idea of trying something different. The flexibility of the IB also appealed to me because I was unsure about the subjects I wanted to study.

What influenced you choosing Impington International College over other colleges?

When I attended the first information meeting, I remember being impressed by the diverse mix of international students in attendance, from countries such as Hungary, Brazil and Peru, and I was excited to connect with so many new people. Having studied at Impington Village College, the transition to Impington International College felt natural. I enjoyed my time at the College so much that my brother followed me two years later!

What subjects did you study?

I chose to study English, Social Anthropology, Biology, Art, Maths and French. Usually, you study three subjects at standard level and three subjects at higher level but I studied four subjects at higher level, including Art. I never imagined, when I was studying sculptures at College, that I would create one for film director Sam Mendes or that I would be commissioned to create a sculpture of St. Peter for the doorway of the beautiful Aldeburgh Catholic Church.

Tell us about the key highlight of your IB career?

The most memorable moments of my IB experience are all linked to the international element of the course. I was fortunate enough to join the trip to Greece, led by Kevin Purday, and having context for the subjects we were studying made it incredibly interesting.

Who inspired you most during your time at Impington International College?

Vicki Worsnop was instrumental in helping me achieve my place at university. I remember her personally advocating for me when I was considering universities because some admissions departments were unfamiliar with the programme 30 years ago. And so, I was able to secure my place at The University of Leeds to study Psychology, one of the UK’s Redbrick institutions.

How prepared did you feel to transition from Impington International College to The University of Leeds?

There are so many elements of the IB that prepare you for the transition to university. After two years of being exposed to academic writing, especially after completing the extended essay, I knew how to structure essays appropriately, and independent learning prepared me for the rigour of academic research, which definitely eased the transition between IB and degree level study.

When I decided to study Architectural Stone Masonry and Carving in Weymouth, followed by a two year lettering apprenticeship with a master letter cutter, instead of pursuing a career in Psychology, the diversity of the IB course, and being encouraged to think independently, enabled me to embrace the change with confidence and transition with ease.

Why would you recommend the IB to prospective students?

Studying the IB gives you the freedom to learn and develop as a student, without specialising at a young age, and the course is tailored to your individual strengths and interests. Not only does the IB prepare you academically but it also develops important life skills such as confidence and compassion which are equally important to help you succeed. It had an incredibly positive impact on my life.

Describe your experience at Impington International College in three words.

It’s difficult to summarise my experience at the College in just three words but they are: eclectic, intense and impactful.